How do we treat a fissure?

The most common operation of a fissure used by our team is the so-called internal-lateral sphincterotomy. This is an operation we normally do with local anaesthesia, which consists on the partial section of the named fibres. The section indirectly produces the progressive disappearance of the pain and the resulting healing of the fissure.

How is the operation and post-operation? Is it painful?

The wound for this operation is extraordinarily small, practically imperceptible. There is no need of suture and post-operation.
The gauzes left as dressing have the only aim of doing an external compression to avoid or moderate a possible haematoma caused by this small wound.
The dressing can be removed after a few hours and there is no need of any treatment on the next day. The affected area can be cleaned without any special precaution.
The pain in the next defecation will be less than what the patient is used to suffering and it will keep on decreasing progressively in the following days.

Should I take any precautions after the intervention?

Does the intervention require hospitalization or sick leave?

These operations are done with local anaesthesia and they don’t need admission to the hospital. They don’t require sick leave either. 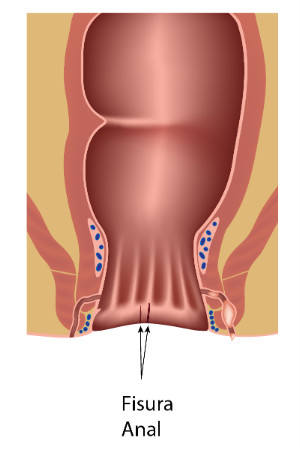